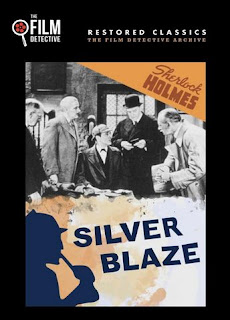 The Film Detective founder Philip Hopkins has channeled his life-long passion for film collecting into the leading purveyor of classic film restoration and distribution of broadcast-quality, digitally-remastered material.

Since launching services in 1999, he has distributed his film library into the home video market and through leading broadcast platforms such as Turner Classic Movies, American Movie Classics, NBC, Hulu, Amazon, and EPIX HD.

Here is an update on the Arthur Wontner Sherlock Holmes Movies.

The Sleeping Cardinal (1931) (USA title: Sherlock Holmes' Fatal Hour), based on Doyle's two stories, "The Final Problem" and "The Adventure of the Empty House" - A very ratty original nitrate print at the British Film Institute acquired in 1957. It was copied in 1996. Very poor copies are available on dvd and the internet.

The Missing Rembrandt (1932)  based on "The Adventure of Charles Augustus Milverton - Still considered a LOST film for now.

The Triumph of Sherlock Holmes (1935), based on The Valley of Fear. Survives at BFI in 3 combined nitrate positives of varying length and quality. It was duplicated in 1985. Poor copies are available on dvd and the internet.
Silver Blaze (1937) (USA title: Murder at the Baskervilles, release 1941), based on "The Adventure of Silver Blaze". Status - RESTORED by The Film Detective  available at Amazon, youtube and other sources.

Thanks to Scott MacQueen, Head of Preservation, The UCLA Film & Television Archive for some of the information on the Arthur Wontner films in this article.