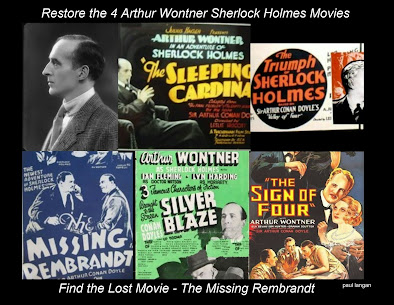 British Actor Arthur Wontner played Sherlock Holmes in movies from 1931-1937. Here is what I believe is the latest information on the 5 films.

The Sleeping Cardinal (1931) (USA title: Sherlock Holmes' Fatal Hour), based on Doyle's two stories, "The Final Problem" and "The Adventure of the Empty House"

The Triumph of Sherlock Holmes (1935), based on The Valley of Fear

Silver Blaze (1937) (USA title: Murder at the Baskervilles, release 1941), based on "The Adventure of Silver Blaze"

The films are also available in various DVD compilations over the years. Unfortunately the quality of the picture and sound is usually quite poor. 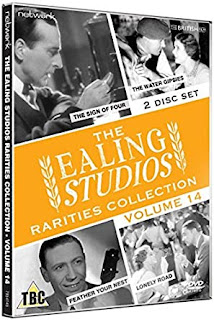 The British Film Institute (BFI) holds 35mm prints on the 4 surviving films. Only 1 has been released in good quality.

Ealing Studios, West London, made more than 150 films over a three decade period. The Sign of Four was the only Arthur Wontner movie made at that studio.

The group is called, Searching for Sherlock: The Game’s Afoot.   This includes finding the lost The Missing Rembrandt and hopefully releasing excellent quality copies of the other 3 Arthur Wontner films.

The current Covid-19 pandemic has slowed the work of this group.

I am hopeful that one day all 5 Arthur Wontner Sherlock Holmes movies will be released for the public to enjoy.