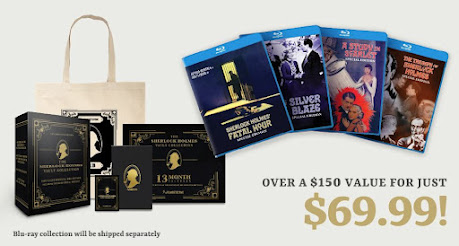 The last couple years I have written about the need to restore the existing Arthur Wontner Sherlock Holmes Films. Some people commented that it would never happen. Thankfully they are wrong!

Over the years there have been many releases of  dreadfully poor quality versions of the Arthur Wontner Sherlock Holmes films.

Then Philip Hopkins from Film Detective restored the Silver Blaze (1937) (USA title: Murder at the Baskervilles, release 1941), based on "The Adventure of Silver Blaze".

There was a rumour that Film Detective were putting together a special blu-ray, dvd box set of Arthur Wontner and Reginald Owen Sherlock Holmes films..

Well, the rumour was true and what a find for Sherlock Holmes film fans! The Triumph of Sherlock Holmes(1935) has now also been restored as part of this box set. From Film Detective here is what is in the amazing set:

It doesn’t take a detective to see this is the BIGGEST collection of bonus materials we’ve ever released on Blu-ray or DVD. Special features include a host of newly restored Sherlockian shorts; Elementary Cinema, an original documentary by Ballyhoo Motion Pictures; a Radio Recreation of Sherlock Holmes; and three exclusive featurettes with filmmaker and film history icon, Samuel M. Sherman. To top it off, each of the four discs includes its own audio commentary, original film posters replicated as postcards, and a booklet insert with an original essay!

So here is a link to purchase it. It is only available Nov. 2nd,-Nov. 26th, 2021 from https://sherlockbox.imagenorders.com/

A giant thank you to Film Detective for taking the time, effort and money into restoring these must-have classics. Buy it now and you will not be disappointed.

We can only dream that the LOST Arthur Wontner Sherlock Holmes film - The Missing Rembrandt (1932)  based on "The Adventure of Charles Augustus Milverton will be found one day.