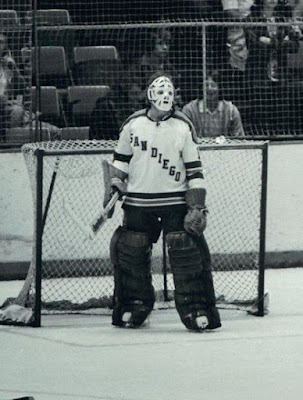 Here is a great Hespeler born goalie now in retirement.

Russell Howard Gillow (born September 2, 1940 in Hespeler, Ontario) is a retired professional ice  hockey player who played 109 games in the World Hockey Association with the Los Angeles Sharks and San Diego Mariners. As a 32-year-old rookie in the 1972–73 WHA season, Gillow was 2nd to Cleveland's Gerry Cheevers in lowest goals against average and helped the Los Angeles Sharks to a 3rd-place finish and playoff berth.

When Bruce Gamble suffered a career ending heart attack while playing for the Flyers they were left without a backup goalie during a West Coast road trip, far away from their minor league affiliates. Russ Gillow was playing for the Spokan Jets of the Western International Hockey League when he was offered a job by the Flyers.

Gillow dressed as Doug Favell's backup for just one game. While he never made it back to the NHL, the World Hockey Associated came calling the next season and Gillow would go onto play 4 years in the Rebel League.

Gillow recalls his brief NHL experience. "We, the Spokane Jets, had just finished winning the Allen Cup for senior hockey in Canada. Doug Favell aparently had the flu and I was asked to join the team and play for the Flyers. Turned out Doug was able to play that game so I just sat on the bench.  Probably would have been drafted the following year but I elected to join the new WHA with the Los Angeles Sharks."

For more information on Russ check out these two links.