65th Anniversary of the Tragedy in Galt CP Rail Crash, May 2nd 1956 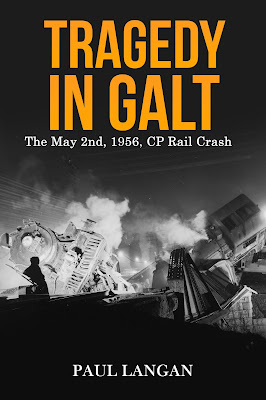 Today is the 65th anniversary of the tragic rail crash in Galt, Ontario that claimed two lives. Canadian Pacific doubleheader through freight train #903 slammed into "extra" train #5186 which was working at the station and pulled out of the siding.

The crash which destroyed the bridge and the spectacle of the damaged engines, just southeast of Galt Collegiate Institute was a site many have never forgotten.

Available at Wordsworth Books Waterloo , Amazon Worldwide, Kobo and Google Play. I also have limited copies at my house you could pick up in my mailbox.