Enjoy this film from the early 1900's showing the R Forbes Mill on Queen Street West.

In 1874 Robert Forbes of Scotland purchased the Randall, Farr & Co. Woollen Mill on Queen St. West in Hespeler. The company was incorporated in 1888 as R. Forbes & Co. Ltd. with Robert's sons George and James serving as president and company director respectively. In 1895 with the passing of Robert and James, George took over full operation of the company building it into the largest textile mill in the British Commonwealth. George continued to lead the company until 1928 when it was sold to the Dominion Woollens and Worsteds Co. Ltd.

Dominion Woollens and Worsteds Ltd. came into Hespeler in 1928 when the company purchased the R. Forbes Company Ltd. mill at what is now Queen St. West in Cambridge. The company would operate in Hespeler until 1959 when it went into receivership and was purchased by Silknit. As the largest woollens and worsteds mill in the British colonies at the time, the factory played a large role in the history of Hespeler, at one time employing almost one third of all citizens of the village.

During and immediately after WWII the mill employed a large number of women employees from both the Hespeler area as well as those who were brought in to work from Newfoundland and Northern Ontario. These women lived in boarding houses or dormitories provided by the mill and many of them stayed in Hespeler after the war, forever changing the village.

Production ceased permanently at the mill in 1984 and one third of it was destroyed shortly afterward in a fire. 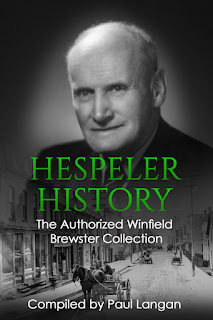 If you like Hespeler history on September 1st, 2021 the book HESPELER HISTORY - The Authorized Winfield Brewster Book will come out. http://paullangan.com.