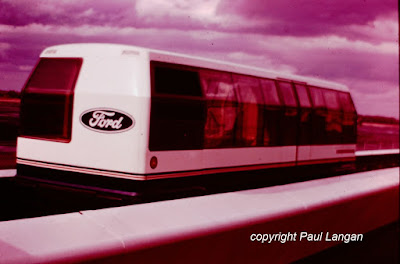 It is funny how a photograph can bring back a memory of an event you had forgotten about. Such is the case of my experience with the Ford ACT Automatically Controlled Transportation or Activity Center Transit rubber tired people mover
I had just purchased a collection of slides of a GO-Urban failed transportation plan for Toronto in the 1970s. One of the unsuccessful transit systems who bid on the project was the Ford ACT. It is also known as Automated Guideway Transit as it runs a guideway above ground.
I decided to research the Ford ACT and realized I had actually seen it and probably rode on it. Ford Company actually built a system in Dearborn connecting the Hyatt Regency Hotel to the Fairlane Mall.
It was during that time of operation in the 1970s I would go to that Mall on a regular basis to buy records. I remember distinctly going to the Hyatt Regency Hotel to see Ricky Nelson perform and seeing the guideway and vehicles.

The people mover system is long gone from the mall and the Ford Co. got out of the AGT business. The Detroit People Mover is also an AGT system though it uses a  different technology.
For the Ford ACT, I only have my memories and photos from the internet (thanks Katie Balamucki for the two photos above) to remind me of this small snippet of transit history.
Below is a description of the system that was in a mall brochure.
"The automated transit system is the most innovative feature of Fairlane, as it represents perhaps the first time that a regional center has been designed for other than automobile and pedestrian access. The initial half-mile segment of the looped system, which connects Fairlane with the Dearborn Hyatt Regency Hotel, started operating in early 1976. The facility consists of an elevated guideway resting on concrete columns and running between a joint station within the shopping mall and one adjoining the hotel lobby.
The automated system, with its two bidirectional vehicles, is programmed to operate under peak load conditions of 1,800 persons per hour. Each electrically powered, computer-controlled vehicle is designed to accomodate 24 passengers and cruise at 25 miles per hour. A 500-foot bypass lane near the midpoint of the system allows vehicles traveling in opposite directions to pass each other. The ACT was developed by the Ford Motor Company as a prototype urban transit system.
Original plans to extend the system to Ford International Headquarters were eliminated because of the expense and because of difficulties associated with a freeway crossing. Nevertheless, even in its modified form, the looped system has the potential of becoming an important means of access to the shopping center for the Town Center's working population, once the line is completed and the peripheral parcels are fully developed. Meanwhile, the system functions as a tourist attraction and runs at full capacity most of the day."